Strange Connections: Ghosts, UFOs and Cryptids. Radio Host of Behind the Paranormal and author - MORE STRANGE CONNECTIONS: UFOs, CRYPTIDS and GHOSTS (with Paul Eno). In a combined 57 years of investigating paranormal phenomena, father-son researchers, authors and broadcasters Paul & Ben Eno have wondered why probes of reported haunted houses often lead to UFO cases, experiences with Bigfoot, and even encounters with outlandish life forms that have no label as yet.

They’ve wondered even more why the military keeps turning up. By 2005 they had learned to investigate whole areas rather than just one location and/or family. The results have been stunning, and ongoing cases such as the Litchfield County, Connecticut, paranormal flap and the new Pennsylvania Triangle investigation keep racking up new data. It all lends credence to their contention: “Explaining the paranormal is not the problem. It’s handing the explanations.”. 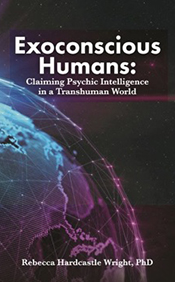 She offers nothing less than a solution for stepping outside our limited view of humans and into an expansive and available intelligence and creativity. Throughout the book, she shares her background in psychic experiences and her voyage into the curious artificial world of trans-humanism.

A central tenet of the book is that Exo-conscious Humans are essential for the survival and advancement of human consciousness. The author poses two critical questions: 1) are psychic abilities possible in a Transhuman culture and 2) could artificial intelligence (AI) suppress or replace natural human consciousness? A compelling rationale for reading Exo-conscious Humans is the potential impact of AI Trans-humanism on psychic intelligence and abilities. 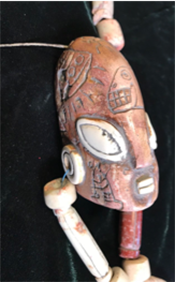 Film makers Jennifer and Bob Terrio, will describe a current film project about unusual Mexican artifacts owned by Victor Comacho “Areological Prohibido” - Spanish for “Prohibited Archeology” Bob Terrio and Jennifer Stein will describe a film project they are researching and working on, about unusual ancient Mexican stone artifacts unearthed from remote caves in 5 different regional areas of Mexico over the last 60 years.

Most of the caves were near ruins of older villages and towns populated in the remote past. The artifacts are controversial in both Mexico and around the world with few mainstream archeologist and academic institutions willing to explore their meaning or analyze radiocarbon 14 date testing done in three reputable scientific laboratories.

Some of stone artifacts are assembled with key accent stones glued into place using organic glue-like materials used at the time of their creation. These accent pieces, like eyes, or lips, or earrings, can be carefully removed, and the organic glue materials can be carbon dated.

The dates suggest these artifacts were made at a time long before the known Mayan, Aztec, Toltec or Zapatista civilizations existed. Bob Terrio and Jennifer Stein will discuss these artifacts after a short film screening on line via zoom, sharing pictures and descriptions of their meeting with Victor Camacho and his wife Gladiz in Utah in February of 2019.